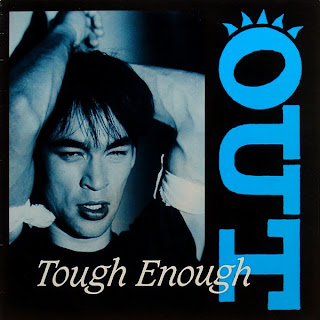 I had planned to offer up the Sunfeast/Craving 12" by Play Dead offshoot M.A.D., but it turned up just last month on the Ad Nauseum blog; if you like Play Dead or the Danse Society then you shouldn't be without M.A.D. I don't know how I missed that blog before, but there is a lot of good music there. So, moving on to my next 12", here is "Tough Enough" by Out (1984). "Tough Enough" is one of the songs from the Illuminated catalog mixed into the Heavy Duty Breaks megamix LP; this 12" has the vocal mix on the A-side (6:36) and a dub version on the B-side (7:06). It's not as good as the only other track I know of by Out ("Business As Usual" on the Breaking the Back of Love comp), but it's a serviceable bit of midtempo 80s UK electrofunk. And for crate diggers there are plenty of useable drum breaks and synth and bass fills. Once again I have no idea who the band members are besides the songwriting credits of A. Sharkey and P. Butcher. My Lethal Poor post was wildly successful in drawing two of the three band members out of the woodwork; can lightning strike again? Please leave any info on this band in the comments. Download the vinyl rip here or here. (Sorry about the high levels and clipping on the A-side, my soundcard can't attenuate the phono preamp input enough on some of these hot 12" mixes. Guess I shouldn't have cheaped out and bought a preamp without an output volume control.)
Posted by Fantod at 8:03 PM