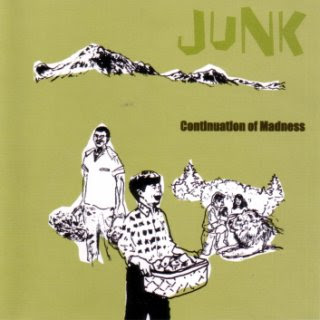 Malcolm Peoples was in turn replaced by Ian "Inkx" Herman; that lineup lasted for only a year and did not result in an album. Junk disbanded; Robbins, Schumacher, and Herman continued as Post Junk Trio, releasing four albums between 2001 and 2007. The last, Chinatown, is in print and readily available for purchase in mp3 format. The first three are more elusive, and may eventually grace these pages. In the meantime, get the Continuation of Madness CD rip here or here.
Posted by Fantod at 8:42 AM 20 comments: 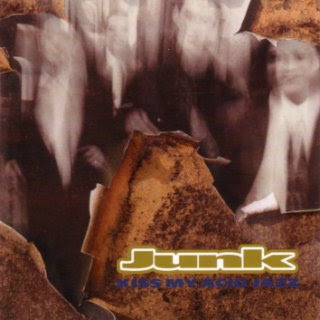 Junk were an instrumental four-piece band who made music somewhere in the borderlands of acid jazz and skronk; the rhythms were too smooth for skronk, but David Robbins' baritone sax was too edgy for acid jazz. The band's bio from their seemingly abandoned website (last updated April, 2001) reads:

JUNK has been called a jazz band, a funk band, a jazzy-funk band, a funky-jazz band, an "anything but jazz" band, even (horrors!) an acid jazz band. While critics can't agree on how to define them, the listeners & dancers who have heard and seen JUNK will usually agree on this: they have a talent for moving their audiences (body and soul) and they do it intelligently, confidently, and without getting hung up on the labels others try to hang on them. Call it what you like--it swings, it grooves and occasionally it goes off the deep end. But label it, and the music will punch a hole through the box you tried to put it in.

JUNK's beginning can be traced back to 1988 when Dave Schumacher (guitar) and David Robbins (baritone sax) roomed together at Boston's Berklee College of Music, while Schumacher played with Frank Swart (bass) in a band that was to have a significant influence on JUNK. Six years later they all met again in the Bay Area and hooked up with Malcolm Peoples, the local drummer of choice for numerous funk/hip hop acts. Their first CD, JUNK was born out of jams worked out in a smoke-filled rehearsal space. The buzz got going right away. "A solid album," said Stepjazz magazine, "which really shows the possibilities of this music and this band." Urb agreed. "Quite against the pretty boy space cowboy pseudo-funkateer pretenders, they are willing to funk themselves into a cold sweat without apology or gimmickry."

Following tours of the West Coast, the band entered the studio with Philip Steir of Consolidated to record Kiss My Acid Jazz. A more varied CD than the first, KMAJ 's jazz/funk mix was spiced with some experimental cuts that raised a few eyebrows but also brought them critical praise, and national radio airplay. JUNK was nominated in the Outstanding Jazz Band and Jazz Album categories of the 1997 Bay Area Music Awards (Bammies).

The "band that was to have a significant influence on JUNK" would be Morphine, whose defining "low rock" sound is echoed in Junk's heavy bass-and-baritone-sax orientation. Get the CD rip of Junk's second album, Kiss My Acid Jazz (Faffco Records FAFFCD-02), here or here; check back in a week or so for their third and final album. (Have a rip of the first? Please let me know, I'm looking for one.)
Posted by Fantod at 7:44 PM 8 comments: 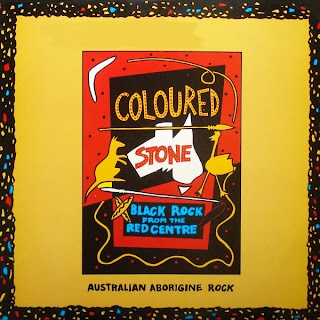 Black Rock from the Red Centre from 1987 is the first US release by Australian Aborigine rock band Coloured Stone; the twelve songs are taken from the band's first two Australian albums from 1984 and 1985. The album profile from Rounder Records reads:

With the emergence of two groups, Coloured Stone and the Warumpi Band, Aboriginal rock 'n' roll is becoming a significantand exciting genre in Australian popular music, with two albums to their credit in their homeland (from both of which Black Stone From The Red Centre is drawn), Coloured Stone saw its first release sponsored by the Central Australian Aboriginal Media Association's own record label, lmpaarja. Recorded in one night, their debut LP contained "Black Boy" and "Kapi Pulka," which became #l hits, via Radio Australia, in the Pacific Islands Region.

Composed of two sets of brothers, the Lawries and the Coabys, with Buna Lawrie as songwriter, lead singer and drummer, Coloured Stone's songs and their sounds are naive, which is not to say simplistic, and they're straightforward and disarmingly honest. On this record you have straightahead rock songs devoid of the usual aggression and hostility and you have unique mixtures of all the different shades of modern pop from country to R&B to rock and reggae mixed up in totally new ways.

Finding original rock in the Australian bush is like finding a punk band in Dubbo —- it happens, but don't count on it. The uniqueness of this new breed of desert musician is that they play fast, loud and often raucous music in a landscape otherwise dominated bythe perennial C&W tunes and easy listening folk, not so much in the fact they are black. The melodies are there, the beat is there and the performances are uniformly strong. . . Coloured Stone is not some kind of folk or ethnic band; they make rock & roll with all the wit and taste that one can expect or hope for, from the personal to the political without heavyhandednesss or didacticism. Years of discrimination and determination, and long days and nights on the bush tracks have honed Coloured Stone and Lawrie's songs to afine edge.

Recommended Cuts:
"Island of Greed"
"Breaking Hearts"
"Dancing In The Moonlight"
"Take Me Back To The Dreamtime"

Get the vinyl rip here or here.
Posted by Fantod at 3:45 AM 7 comments:

Monkeyspank - Demons Flew Out Of My Mouth 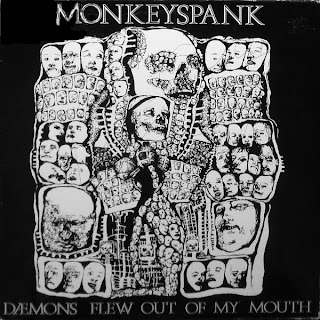 Here is an artifact from the Baltimore music scene in 1990: Monkeyspank's first album, the 7-song Demons Flew Out Of My Mouth on Merkin Records. The last.fm entry on Monkeyspank reads:

Monkeyspank was a Baltimore hard rock/funk band active in the late 1980s and early 1990s. Monkeyspank featured an unusual lineup of three drummers/percussionists, two bass players, and a guitarist.Monkeyspank’s sound owes equal debts to guitar-driven heavy rock and polyrythmic funk, in some degree similar to the Red Hot Chili Peppers (albeit with a much darker edge) and local Baltimore contemporaries The All Mighty Senators. They released two albums, the vinyl-only Demons Flew Out of My Mouth and Blue Mud.

Get the vinyl rip of Demons here or here; see the Monkeyspank MySpace page here; get some "where are they now" information here.
Posted by Fantod at 9:11 AM 7 comments: