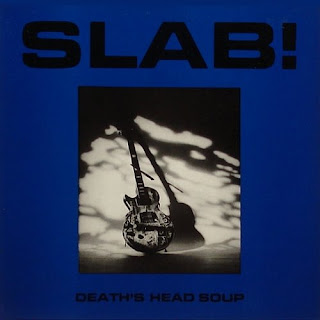 Slab!'s final recording before a 19-year hiatus was 1989's "Death's Head Soup" single, which I will once again let currybet describe:

The final flurry of the band was 1989’s Cameo ‘Word Up - Sucker DJ’ sampling anti-Thatcher rant of knuckle down and eat your “Death’s Head Soup”. With a sole writing credit to Stephen Dray I have no idea whether it was a solo record or not, but it certainly was a long way from “Mars On Ice”...

I've been listening to "Soup" for nearly 20 years without realizing that was a Cameo sample, but now that I read that it's so bleeding obvious! How could I have missed that?! No, it wasn't a Dray solo record, the full lineup was:

They sure went out on a high note; I could listen to this driving beat and insistent fuzz-bass riff for hours, shouting along "Knuckle down, drink your death's head soup!" all the while. The B-side is the Descension album track "Switchback Ride"; the 12" single added a club mix of "Death's Head Soup." Get the 12" vinyl rip here or here.

Great record, thanks a lot. I missed Slab! the first time round, but they were worth the wait.

I've only just turned up at this party, sorry I'm late. One stupid FB quiz, about the best gigs you've ever been to bought to mind Slab! at Norwich Arts Centre in about 1987 or 88. I know I enjoyed it that much that a mate and I went upto and thanked the band at the end of the gig and then went out and bought everything we could on vinyl. I'd always assumed we were the only people on the planet that actually remembered them, so this blog was a really nice thing to bump into, and a good read. The music does still sound remarkably coherent, I just need to digitise it and get a new copy of "Descension" which has gone Awol. thanks people.