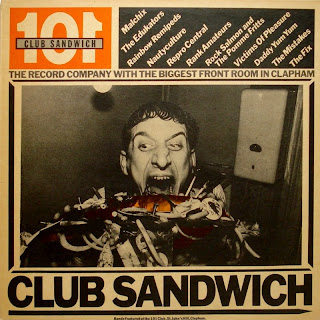 Here is Club Sandwich from 1981, the third and final (for now, at least) vinyl rip from 101 Records' series of budget-priced live compilations. All the songs were recorded at the 101 Club in St. John's Hill, Clapham. The previous two LPs posted here each had two or three bands that went on to greater fame. On Club Sandwich, though, only one band broke through: The Fix added another X to their name to become chart-toppers The Fixx. The song included here, "The Strain", appears on some versions of their Shuttered Room album. The full Club Sandwich track list is as follows:

After The Fixx, the Rainbow Remipeds produced the largest catalog of the rest of the bands here, though mostly as simply The Remipeds. They had a horn section and played the melange of rock, funk, jazz, dub, and Latin music commonly known as "postpunk" and most often associated with Pigbag. The Remipeds don't quite have Pigbag's wit and energy, and their calypso accents in "Tropical Milk" are in questionable taste, but if you like the genre then you shouldn't miss them. They reissued their only album, The Tahiti Syndrome, in 2005 with bonus tracks. Check the album webpage for samples of all songs, and be sure to check out the opener, their signature tune "Hawaii Five-O." The Remipeds MySpace page has loads of videos which could keep you busy for half an hour or so. Rock Salmon and the Pommes Fritts and Daddy Yum Yum both contribute decent rockabilly tracks (the later featuring an accordion). I can't find any information on Rock Salmon, but Daddy Yum Yum left a bit more of a trail. A Brighton band, percussionist Willi Kerr describes their music as "thrash skiffle." Kerr and Dave Simner are now members of the "Old Time, Hillbilly and Hellfire Gospel" band The Curst Sons. Repro Central got two tracks on the album, though they are not noticeably better than the other nine bands. Rank Amateurs sound more than a bit like the Police, and the rest of the bands play competent new wave that is good for a listen but not particularly memorable. If nothing else, Club Sandwich is a fantastic time capsule, a snapshot of the bread-and-butter of new wave as opposed to the most popular stuff that is remembered today. Get the vinyl rip here or here.
(I thought for a long time that was Jim Skafish on the cover, but according to the fine print on the back it's Rick Mann.)
Posted by Fantod at 4:26 PM 5 comments: 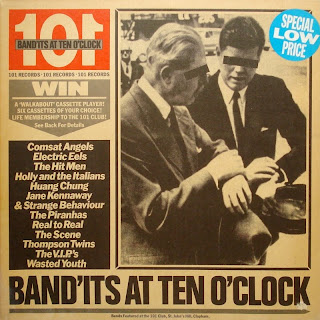 Here is another album from 101 Records via Polydor, documenting live performances at Clapham Junction's 101 Club. Also from 1980, the track listing on this one is:

I have determined that The Scene is an early name for the band Giants, who released "All People Go Mad" as a single in 1982. Giants featured guitaris/songwriter Gordon Reaney and singer Paul Cox. The Hit Men soon consolidated their name to The Hitmen, the first band on Ben Watkins' road to fame. The Hitmen's two albums are also available on this blog (with "She's All Mine" appearing on the first); see here. The V.I.P.'s formed at Warwick University in 1978; lead singer Jed Dmochowski left in 1980 to pursue a solo career, the rest of the band forming Mood Six. See below for a vintage video of "Causing Complications." The Piranhas went on to some success, with their song "Tom Hark" becoming an enduring football anthem (I am told). Real To Real included a pre-Depeche Mode Alan Wilder. Holly Beth Vincent/Holly and the Italians had a couple alternative hits with "Tell That Girl To Shut Up" and "Dangerously." I can't find any information on the Electric Eels (they are definitely not the 70s punk band from Ohio); the "Thoroughly Modern" songwriting credits are for Methane Wernick and Mad Molecule, which I am pretty sure are aliases. They are obviously big fans of Eno-era Roxy Music, and their musical chops are far above most of the other bands included here. Jane Kennaway put out a couple singles and has a band now called A Different Kind of Honey. The Thompson Twins really date-stamp this record with a live version of their single "Squares and Triangles" and its repeated chorus of "one-nine-eight-o," bearing little resemblance to their later hit material. Wang Chung appear as Huang Chung; Sheffield's Comsat Angels put in a version of "Independence Day," a song they later recorded for two different studio albums; and Wasted Youth's "Jealousy" sounds like a twisted remake of "Crimson and Clover." Get the vinyl rip here or here. Here is one of a series of live albums released in the early 80s by the house label (via Polydor) of the 101 Club in St. John's Hill, Clapham. Each of the albums contained tracks by several up-and-coming bands recorded live at the club and was released at a budget price in a rough cardstock sleeve with tabloid-style graphics. From 1980, this compilation includes:

Unless you have heard these early Thompson Twins tracks before, chances are you won't recognize them as the same band who performed "Doctor, Doctor", "Love On Your Side", or even "In the Name of Love"; they sound like a punk-influenced new wave band! David Bowie-ish singer Philip Gayle later achieved some chart success as Philip Jap with his Trevor Horn-produced single "Save Us" (and the Tony Mansfield-produced "Total Erasure"); his lone solo album is quite good and is available on the Off the Record blog. The third and final act on this record to have managed to put out an album is Local Heroes SW9, whose members included Kevin Armstrong (later of the Passions) and sometime Thompson Twin Matthew Seligman. Jane Kennaway put out a couple singles and appears to have a band now called A Different Kind of Honey; Deaf Aids also released just two singles; and I can find no mention of the Mechanics other than on this album. They are more bluesy than the rest of the bands, but work up a nice groove on the original "If I Make My Own Bed" and then encourage an audience singalong in the cover of "Higher and Higher." The only information I have on the band members is that the songwriting credit is for Terry Quinn.

About the rip: the pressing is not great: there is noticeable surface noise and an above-average amount of clicks and pops. I removed as many as I could, but some remain. Also, the sound quality on side 2 suffers from the 29-minute playing time; levels (and general sound quality) are lower than on side 1. I have normalized the levels, but the quality is what it is. It's no worse than FM radio, at least. New links: Get the vinyl rip here or here. More Live at the 101 albums to come.
Posted by Fantod at 11:13 AM 5 comments: