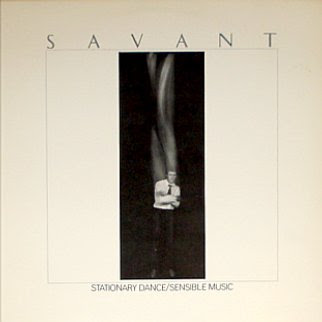 One of the most respected independent electronic music labels of the 80s was Kerry Leimer's Palace Of Lights, on which he released several of his own recordings (as K. Leimer) as well as albums by Roy Finch, Marc Barreca, and Michael William Gilbert. Leimer's music was mostly in the ambient vein; he used the moniker "Savant" for his more rhythm-based works, the "Stationary Dance"/"Sensible Music" single (1981) and the LP The Neo-Realist (At Risk) (1983). Palace Of Lights went dormant after 1983 and Leimer disappeared from the music scene, concentrating on his and his wife's design business, Leimer Cross. After nearly two decades of inactivity, Leimer revived Palace Of Lights in 2002, reissuing his 80s albums on CD and releasing new work by himself and others. I would have expected "Stationary Dance"/"Sensible Music" to be included on The Neo-Realist CD, but it wasn't; the initial vinyl release is all there is. "Stationary Dance" is a classic piece of postpunk art-funk, with an infectious rhythm track (looped?) featuring prominent bass guitar, overlaid with atmospheric synth lines and cut-up spoken vocals. "Sensible Music" is instrumental only, with a slow but insistent rhythm and an overall sound that recalls Jon Hassell's work with Brian Eno. Musical contributors on the record are:
Get the vinyl rip here or here.
Posted by Fantod at 6:53 PM

This is lovely stuff, any chance of the album ?

Sorry, I won't be posting the album as it is in print and available for purchase. (And a label representative asked another blogger to take down his rip.) The catalog page at CD Baby has generous clips (2 minutes each) of all the tracks on the album.

This is an utterly brilliant single I have loved since I DJed it "back in the day".