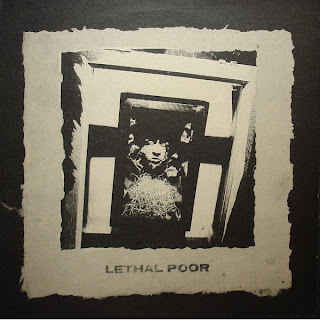 This is the first of several posts that will feature just a single rather than a full album (because I have a bunch of singles that I've put off listening to while I've been ripping albums). In most cases the bands I'll be posting never did release a full album, or if they did they didn't include the single in question. While the next posts will be short on quantity, I have some very high-quality rips lined up.

The first is the sole recording by UK band Lethal Poor, from 1985. The two tracks, "Trancefloor" and "Honour", are both in the "gothic funk" style I love so much. Fans of 23 Skidoo, 400 Blows, A Certain Ratio, or The Men should find this right up their alley. The song credits are to "North, Winter, Musker", and I have ascertained that Musker is keyboardist David Musker (now a patent agent), but I don't know who North and Winter are. Please leave a note in the comments section if you know more. Regardless of their identity, this is one ill slab of vinyl; get the rip here or here.
Posted by Fantod at 3:46 PM

Winter was Phil Winter, the bass player. He's done some stuff since then. North was Steve North, the guitarrist. Not sure what happened to him. You're right to say that Dave Musker (that's me) was the keyboard player. It was a Farfisa compact organ through a fuzz/wah pedal, with a WEM copycat on the guitar and a sort of home made wooden synth in there somewhere.

I reckon that first comment was from Dave Musker...Hi Dave! I'm the 'North'...Steve North. Lethal Poor were originally Phil Winter (bass) and myself (guitar and vocals), brought together by a common interest in tight funk and avant-garde noisey stuff. I guess we were both around eighteen (1982-83). You were quite right to name check A Certain Ratio as an influence (Phil was very keen on them). We wrote and rehearsed in this big place in Finchley, North London called 'The Vicarage'. Phil lived there and it was a hotbed of musical activity. Joolz and Alan from Delta Five lived there...as did others.
http://www.amazon.com/Singles-Sessions-1979-81-Delta-5/dp/B000CNFB2W
Other regular visitors to The Vicarge included Mal from Caberet Voltaire and people from Mute records. There were a constant stream of people moving between Sheffield and The Vicarage. One of our favourite bands were the less well-known punk-funksters Medium Medium.
http://www.mediummedium.com/
We both had very clear ideas about song-writing. A groove on the drums (no cymbals or tom-toms...yuck!)...heavy locked in bass and guitar that switched between clipped funk (I loved Nile Rogers for this)and screaming noise (Adrian Belew's discordant style always gripped me). Phil was always slightly more of a dance music enthusiast than me. We both loved Chic, Gang of Four etc, but I wasn't so keen on 12' dance mixes as Phil was. I always tried to bring things into a song structure. My side passion was for singers like The Associate's Billy McKenzie and Scott Walker, which didn't always fit into the more left-field experimentalism of the other band members(!). Dave Musker was bought in because we wanted to expand the sound. He was already an ex-member of the legendary Television Personalities at this point. Dave made a great contribution to our unique sound. He later (and while in Lethal Poor) played with the Jasmine Minks and The Prisoners (I think?). Dave was a bit more from the 6os psychedilia side of things. The ambient noises that he added were more early Pink Floyd than post-punk. Dave was a keyboard player, but I can only rarely remember him pressing down any keys (I think there was a Farfisa organ involved somewhere). He mainly used a home-made synth in a huge wooden box. It took several people to lift and had no keyboard. As all of the sounds were created using patch leads, we rarely had the same sounds twice, when playing live. Dave was always a bit of a maths geek and I can remember him going to see Stockhausen (at The Barbican) and taking notes throughout the entire performance... I sure Dave will correct me on all of this and tell me I’ve got it wrong…apologies if I have.I can remember us going to see bands such as: Einstruzende Neubatten, The Swans and Sonic Youth. Trancefloor/Honour (Lethal Productions via Rough Trade) was our only vinyl release, but I can reveal that there are other recordings in existence. I was a sound engineer in the early 1980s and I helped out with the production of the single. We played live quite a bit, mainly in London clubs. Towards the end of Lethal Poor, I can remember that both Phil and I adored the band World Domination Enterprises. There was something about their sonic attack and underlying dub/funk influence that seemed like what we were doing, taken to its logical extremes. I also became a big fan of Steve Albini (Big Black and Rapeman). Phil Winter is now chief noise-maker with new-folksters Tunng:
http://www.tunng.co.uk/biography.html
http://www.boomkat.com/item.cfm?id=143128&ljb=1&tracks=176267:143128,176268:143128&type=music
The cover for Trancefloor/Honour was designed by my old friend Dan Perfect, who has gone on to become a very successful artist. Dan is also a musician and strangely the nephew of Fleetwood Mac's Christine McVie (!). Long after I lost touch with Dan (2004), he recorded a solo album with McVie. The photo of the band that I will try to put up somewhere was actually taken and manipulated (ok...ripped up) by Dan. I don't think that this has ever been published anywhere else. If you can see the image...from left to right: Steve North, Dave Musker and Phil Winter (crouching).
http://www.danperfect.co.uk
http://www.saatchi-gallery.co.uk/artists/dan_perfect.htm
http://www.oneintheother.com/exhibitions/currentexframe.html
I've got loads of other photos, live posters, demos etc and I will try to put together a web site, when I have time. I've noticed that Trancefloor regularly turns up in the top 100 all-time Goth tracks...which always amuses me.
http://www.users.dircon.co.uk/~dancer/vampsong.htm
We never considered ourselves Goths. Sure, I often wore makeup, but I always thought that the first wave of Goth bands were desperately uncool. I have seen Lethal Poor referred to as Dark Wave or Synth Wave. My partner at the time was a full-on Bat Cave Goth chick, so I guess I was exposed to Sisters of Mercy, Alien Sex Fiend, The Mission etc, but they were never to my taste. Lethal Poor did play at several Goth clubs...I guess....so, there was definitely cross-over. I am now Dr Steve North PhD and amongst other things, I worked for NASA on Artificial Intelligence! After Lethal Poor, I played guitar with funk band Desperate Fun, before forming noise-shockers If It Bleeds... Both of these were pre-Internet and had no vinyl/CD releases. Lots of gigs though!. I didn't play much for the next decade, but I started again last year and now play and sing with a local band, deep in the countryside. We did four low-key gigs last year and have more planned for 2009. I can't imagine that a Lethal Poor reunion is on the cards...none of us are in touch...but you never know!

By the way...I think that Phil Winter has also recorded as Summit and possibly DJ Summit (?)

THANK YOU, Messrs. Musker and North, for filling in the history of Lethal Poor and relations! And now with the info and links provided I have a new journey of discovery mapped out. I feel as if a "cold case" has just been solved. I always loved Medium Medium as well, supposedly they've had a new album in the can for the last year or two that I've been dying to hear. And now that I know there are unreleased Lethal Poor recordings, I'm dying to hear those too! Steve, if you get a website up please let me know, I'm sure there would be a lot of interest from readers of this blog. Thanks again,

would really love to hear this, but the rapidshare limit has been reached and zshare is of course now defunct. if you have the time a re-up would be greatly appreciated.