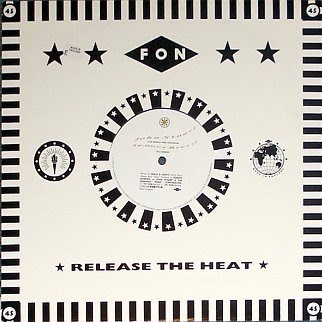 At the height of their success, Sheffield band Chakk had two singers, Jake Harries and John Stuart. Harries had the gritty voice, Stuart the soulful croon. According to Burl Veneer's Music Blog:

Richard Hawley is currently riding a wave of popularity in the UK as the "Sheffield Sinatra," but in 1987 he played guitar behind velvet-voiced ex-Chakk singer John Stuart on Stuart's only solo single, a cover of Seals and Crofts' "Summer Breeze." You will never hear a lusher version. (There's that unmistakable Designers Republic graphic style again.) Rounding out the backing band, billed as The Heavenly Music Corporation, are Dee Boyle (drums, also from Chakk), Darrell de Silva (sax), Jon Quarmby (keyboards), Justin Bennett (percussion), and Heather Allen (backing vocals), with production by Rob Gordon. Alas, that was all from The Heavenly Music Corporation as such. Stuart would go on to be a member of the Lovebirds (with Hawley) and Magic Bullets. He now lives in Barcelona and continues making lovely music as one-half of Forgetting, and on his own as, once again, The Heavenly Music Corporation.

Presented here is "Summer Breeze" and the B-side, "Black and Blue (Parts 1 and 2)"; get the vinyl rip here or here. (Please let me know if the Rapidshare caps downloads at 10 grabs; I am not happy about this new limitation and am looking for workarounds.)
Posted by Fantod at 7:35 PM

Who remembers Treebound Story? Check that one out!
I can remember Richard Hawley from his schooldays. My sister, Jane, was there too, along with Sarah, who went on to produce House Music, in Miami.

Sheffield does have a supreme history in music, going back to Joe Cocker (when he was called Vance Arnold!) and Dave Berry, going through all the late 70s, early 80s bands (where else could you find Human League, Def Leppard, Thompson Twins, and others who became top session players all on the same bill, over 2 nights at The Limit!), and on to Arctic Monkeys. And it still goes on!

Thank you for this rare gem!

I own the 12" of Summer Breeze by John Stuart. It's one of my most treasured tunes and I am, at the moment, wrestling with modern technology to preserve it!!!
Thank you!