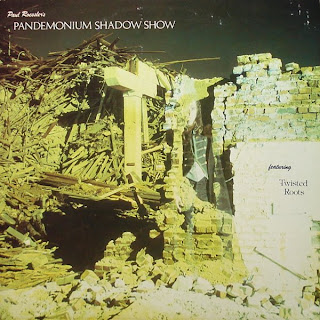 I always thought of Paul Roessler as the keyboardist for L.A. glam-punk-horror-metal-kitsch band 45 Grave, but he was also a member of techno-punk band The Screamers, and has played keyboards for about a zillion other acts, including Dead Kennedys, Nina Hagen, DC3, Saccharine Trust, Geza X, and many more. In the 80s he formed his own band, Twisted Roots, which featured his sister (and Black Flag bassist) Kira Roessler and at one time Germs guitarist Pat Smear. For the 1983 album Pandemonium Shadow Show (title used by permission of Ray Bradbury) Dix Denney is the guitarist, Michelle Bell sings, Gary Jacoby plays drums, and producer Paul Cutler plays guitar and percussion here and there. The liner notes mention that "Pat Bulsara contributed to guitar arrangements on It Must Be The Weather, White Limousine, Fill Your Heart." I'm guessing that "Pat Bulsara" is actually Pat Smear, who recorded a song called "Holy Bulsara" on one of his own albums; Smear and Jacoby also made music together as Death Folk. There are two fantastic tracks on this album, the closers on each side. "Fill Your Heart" closes side one, and could be a song by "White Rabbit"-era Jefferson Airplane, with its psychedelic lyrics and expansive chorus. Bell's voice does not have the fullness of Grace Slick's, but on the other hand, the band creates a groove here much more compelling than anything the Airplane ever did. The side two closer, "You're Perfect," is a sci-fi number about loving a robot that also works up a killer groove. Of the eight other songs, four are instrumentals and four are not; they're pleasant enough, but for me they are the appetizers leading up to the main course at the end of each side. Get the vinyl rip here or here. 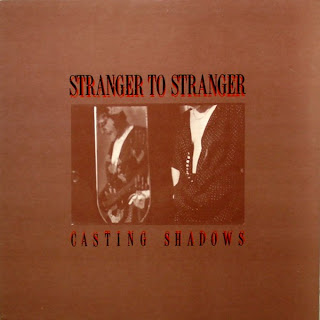 From 1984 until 1991 Stranger To Stranger produced seven recordings. Stranger To Stranger's music was alternative in its flavor, borrowing from the early Cure and Echo and the Bunneymen. They played clubs and venues from Boston to Virginia, but experienced their greatest success at the 9:30 Club in Washington D.C. The title song from 1985's The Child in Me experienced particularly heavy airplay on college and commercial stations in that area. Subsequently, record sales in the area were very good and the shows at the 9:30 Club drew a good audience. Recently, an amalgam of The Darkest Dreams and Shatter the Night was produced as a CD by drummer Eric Carlson. That was the impetus for creating this page... I hadn't listened to the material in a very long time. I felt compelled to put up this page so some of our friends could get their hands on some vintage STS in MP3 format. We hope to come up with a good copy of The Child in Me in the not-too-distant future.

Stranger To Stranger was:

The aforementioned "The Child In Me" came after this album, but I have included it in the archive file as a bonus track because it's simply exquisite. (It's a copy of the file offered on the band website.) In the words of one of my favorite song blogs, it should have been a hit. Get the vinyl rip here or here.
Posted by Fantod at 8:14 PM 2 comments: 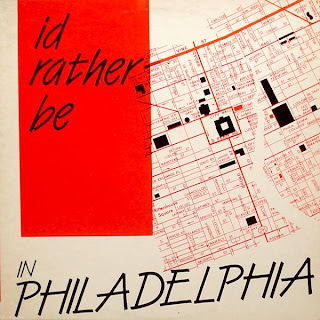 A note on the recordings: this has to be the worst pressing I have ever heard. Usually I don't do wholesale click removal for fear of losing actual music; I just do spot removals of egregious clicks and pops. But this record has a substrate of clicks and pops all the way through; the record itself has tiny bumps all over it. So in this case I did run the whole thing through Audacity's click remover, and it sounds much better, but still far from perfect. I'd be interested to hear from anyone else who has this album whether theirs is as noisy as mine. Don't let the pops and clicks keep you from checking out this trove of rare regional new wave, though: get the vinyl rip here or here. Update 2/11/2012: My DF link is still up, but there's a better rip available at Systems of Romance.
Posted by Fantod at 8:40 AM 5 comments: 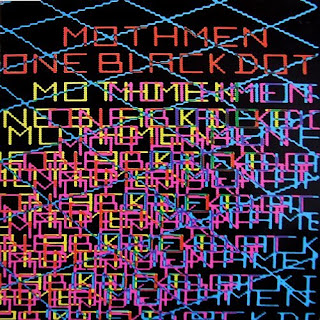 The Mothmen's first album, Pay Attention, was a trippy dub affair which was released by Adrian Sherwood on his On-U Sound label in 1981. While the band produced the album themselves with no input from Sherwood, it's a dead ringer for Sherwood's own psychedelic dub style. That sound is nowhere in evidence on the band's second album, One Black Dot, released in 1982 on the Do It label. Their style this time around is more conventional, new wave-y with a bit of postpunk funk thrown in. There are hints of other bands throughout the album: the Police, Way of the West, Funkapolitan, The Blue Nile, Modern English, and Medium Medium, for examples. There are many inspired instrumental moments, and it's quite a good album over its ten tracks, but the sound never quite congeals into something distinctive, and there is no killer single (though "Temptation" comes close). The band lineup on One Black Dot is:

Bowers and Joyce would go on to be part of the original Simply Red lineup. The rest of the Mothmen, I don't know about. Get the One Black Dot vinyl rip here or here. 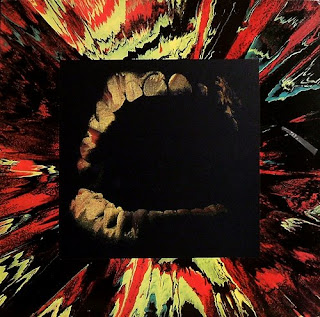 How about some more Perennial Divide? 1987 saw them release just one record, the four-track Beehead EP:

"Clamp" is a 40-second sound collage, so Beehead is essentially a three-song EP. But they're good songs, especially "World Spread," which after an excessively long intro settles into an energetic breakbeat groove with a popping bassline. The other two songs are the same kind of noisy, off-kilter funk that made Purge so great. Get the vinyl rip here or here. That does it for my Perennial Divide collection. There was another 12", "Burndown", in 1986, which was packaged together with a repressing of Purge; I didn't buy that one, as I already had Purge and didn't want to buy a second copy just to get a new 12". Then in 1988 there was an unofficial release of "Leathernecks," but I never found a copy. If you come across rips of either 12", please let me know in the comments. 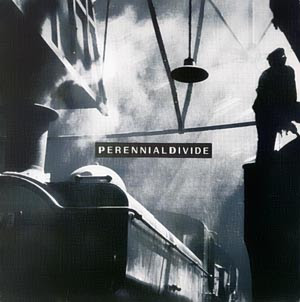 By request, here is the only album released by Perennial Divide, the Swindon-based group active from 1986 to 1988 and consisting of John Corrigan, Johnny Stephens and Paul Freeguard. ("Perennial Divide" comes from Naked Lunch; it is Burroughs's play on the term "perineal divide," i.e. the "taint." But in the band's case it takes on additional sociopolitical meaning, evoking Britain's historical class system and the struggles of the working class for equality.) Corrigan and Stephens went on to form Meat Beat Manifesto, with Corrigan adopting the pseudonym Jack Dangers. Released in 1986, Purge was another exciting release from Rob Deacon's Sweatbox label, which grew out of his Abstract magazine and LP series. The cover art (of Swindon railway works) recalls Neville Brody's early sleeves for ClockDVA stylistically, and Perennial Divide's music explores the same realm of politically-charged noise-funk as that seminal band, though with more funk and less noise. There are some tasty basslines on this album, particularly in "Captain Swing." Purge is a bona fide postpunk masterpiece. The tracks are:

Some of the tracks run together, and I've made my best guess as to where one ends and the next begins. It won't make any difference if you listen to all the tracks in order (which you should!). Get the vinyl rip here or here.
Posted by Fantod at 7:23 PM 3 comments: 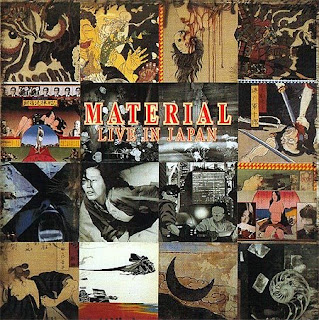 When is a Material album not a Material album? Or rather, when is a Material album a Material album? Bill Laswell has produced lots of albums featuring the same rotating stable of musicians that are sometimes called Material, but most of them have given top billing to featured artists or sported other band names: Ginger Baker, Nicky Skopelitis, Aiyb Dieng, Bill Laswell, Deadline, Sacred System, etc. Live In Japan could just as well have been credited to Foday Musa Suso or Ginger Baker. But it has the Material moniker, the only album of original material (as it were) released during the brief association with the Restless label. The recordings on Live In Japan are taken from performances in Tokyo, Kyoto, and Imabari in August 1992 with the following lineup:

The All Music Guide doesn't think much of this one:

It's a great lineup, and one that should have delivered much more musical interest than it does on this album. "Leaving Earth" is a six-and-a-half minute meditation on a one-chord riff; more than just boring, it's also badly recorded. "Desert Star" is an improvement, with a nice interplay of fretless bass and a bowed African instrument in a much improved mix. And "Out of Dreamtime" affords more dynamic variety, but it leads into an eleven-minute percussion solo which is well executed but drags on forever. Overall, this is a disappointing disc that could and should have been much better.

Hey, if you like good drumming, a long, well-executed percussion solo is fantastic! And something that gets lost in the plethora of Laswell productions is that he is an awesome bass player, but that aspect comes through throughout this album. And it's a generous 69 minutes long. What's not to like? Track list:

I don't know where most of these songs originated, just that the last two are originally by Pharaoh Sanders. Anyone know? Let me know in the comments. Get the CD rip here or here.