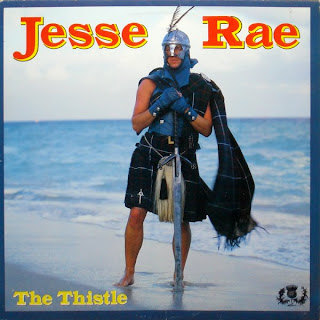 Here is the only album by funky Scotsman Jesse Rae (not to be confused with Oregon "roots pop with a blues edge" band Jessie Rae; why they would choose a name that is so close to an established musician's is a mystery to me). Wikipedia says:

Jesse Rae is a Scottish singer from St Boswells,[1] who is particularly remembered for his single "Over the Sea", which reached number 65 in the UK Singles Chart in 1985.[2][3] The video for the single – which features a kilted, helmeted, claymore-brandishing Rae in both New York City and the Scottish Highlands – won a Vira award.[4] An album entitled The Thistle was released in 1987 on WEA but failed to chart. As a songwriter, he is also remembered for the 1982 Odyssey hit single, "Inside Out".[5][6] In 2007, he stood for the Scottish Parliament as an independent in the Scottish Borders electoral constituency of Roxburgh and Berwickshire.[7] He
gained 318 votes for a 1.2% share of the vote.[8]

The opening track is Rae's own recording of his hit for Odyssey, "Inside Out". What the article doesn't mention is the funk pedigree of The Thistle: it was produced by Zapp leader Roger Troutman, who also plays on most of the songs, and his brother Lester plays drums or percussion on about half of the tracks. As if that weren't enough, Funkateer Bernie Worrell plays on five tracks, and P-Funk guitarist Michael Hampton puts in a couple of appearances as well. That said, the album is definitely a product of the 80s, and while it's among the best of 80s pop-funk, it's not exactly timeless. But it's got plenty of good licks, and the thickest Scottish brogue you will ever hear on a funk record. Get the vinyl rip here or here, and check out the videos below. Oh, and about the outfit: Rae "rarely appears in public without his steel helmet and full Scottish garb." 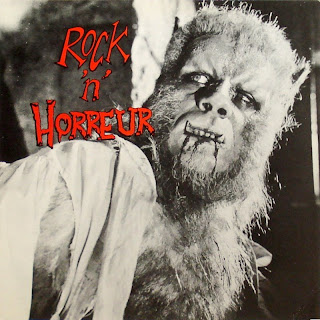 Here is another album courtesy of Stephan James/Stephen J. Munson of Living In Texas: Rock'n'Horreur, a French compilation of psychobilly bands from 1989 (or 1990, details are sketchy). Most of the bands are French as well, with the exceptions of Batmobile (Dutch) and Hi Grip (Swiss). Living In Texas, represented here by their best song, "The Girl in the Red Leather Coat," were actually English but had laregly relocated to France by this time. While the eleven bands here take different approaches to rockabilly, injecting varying degrees of camp horror, the influence of the Cramps is always felt. The track listing is:

The name of the record company is not even listed anywhere, unless it is AR; the catalog number is AR 002. The collection was compiled by Mat Firehair of the Washington Dead Cats. I have included a large photo of the back cover in case you want to try to read the liner notes (in French and English). The blue type on amber background is hard to read on the jacket itself; it is even harder to read in the pic, but it is still barely legible. And now that I take the time to read it, it's not at all informative, just a few sentences that link the song titles together into a "story". Oh well, delete it if you like, I won't be offended. Get the vinyl rip here or here. 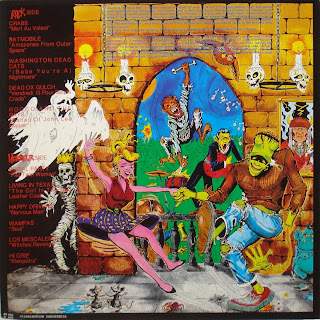