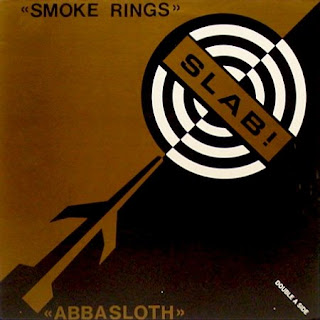 The "Smoke Rings"/"Abbasloth" double-A-side single, released in 1987, was Slab!'s final recording with a horn section, and it's a killer! The tempo and the rhythm are akin to George Clinton's "Atomic Dog", but everything is so much heavier: the slapping bass, the slamming drums, the scraped guitar a la Sonny Sharrock. It's an amazing melting pot of funk and sludge that demands to be played LOUD. On the defunct BBC Collective website there is a good overview of Slab! records by user "currybet" which contains the following about "Smoke Rings":

“Smoke Rings”Slab!’s third single, “Smoke Rings”, a love song for nuclear missiles from the point of view the military, was a disaster. Later, when I met Stephen Dray, Slab!’s singer, he said that it had been led on by the record company asking for a ‘hit single’ - and it was the first time that Slab! had released an edited 7” single to accompany the 12” release. Mind you he also said that he thought the vocals on their debut single “Mars On Ice” sounded like they had been recorded in a toilet, and it is one of my favourite records ever, so what does he know?

I find it odd to see "Smoke Rings" described as a "disaster", as I recall reading several positive reviews of it at the time, and it seemed to be popular in the cutting-edge dance clubs. Perhaps Mr. Dray can give us a little more of the story?

In addition to "Smoke Rings", the 12-inch also includes a dub version, "Cruise Missile Smoke Rings", and the instrumental "Abbasloth", which has a similar monster beat but substitutes free-jazz horn freakouts for vocals. It is a MUST HAVE. Get the vinyl rip here or here. Check out the new Slab! website here. Check the comments here for occasional updates from Steve Dray (the mosesman) on the progress of the new Slab! album! See here for Slab!'s Music from the Iron Lung mini-LP. Click here for all my Slab! and Slab!-related offerings.
Posted by Fantod at 5:31 PM

Thanks very much, this is the only one I don't already own. Phenomenal band.

glad you spotted the sonny sharrock reference... we used to call it "sharrocking" when we needed a bit of free gtr playing...

the bass part was written by dave morris but played by bill davies.... i think the bass is tuned down to a low C if i remember right...

it was another Slab special..... recorded and mixed in 2 days in its entirety b-side included

the fretleess bass overdub is very jamaaladeen tacuma...... so you can see what we were listening to around the time....

yeah it was us being "commercial".... it was also the first song written after the band was signed up.... all the other tracks on Mars on Ice and Parallax avenue were original songs from the days when we had formed...

anyway... thanks for putting this up