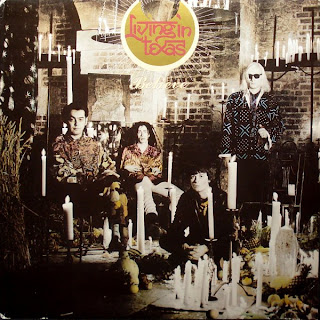 I'm back! This time I bring you the final album by Living In Texas, Believe, released in 1991. It's a far cry from their great recordings of the mid-80s, mostly due to guitarist Daniel Glee's absence. Believe really emphasizes how much Glee contributed to the band's sound: his unique fusion of gothic, punk, and rockabilly styles made Living In Texas stand out. While Glee gets a couple co-songwriter credits, he apparently left the band before the recording sessions. Guitars on Believe are handled by former second guitarist Jeff Wallace and newcomer Claudia Pinto, plus various solos and extra guitar parts by Marc Sullivan, Steve Forward, and Laurent Roubach. A lot of the guitar work is disappointingly generic, in the manner of middle-of-the-road radio fodder. Only Stephan James's lyrics and singing provide continuity with the band's past, but even he has indicated that his involvement at the time was half-hearted. Judging by the number of people involved (in addition to the five band members and three extra guitarists, there are five more musicians credited for keyboards, percussion, and backing vocals) it sounds like the recording process was rather scattershot. The ten songs are good; the execution is hit-or-miss. But even if it is not the band's best work, it is still better than a lot of more popular music. Get the rip (from the Cent Pour Cent vinyl release) here or here.
This concludes my Living In Texas discography project, in the sense that I have ripped and uploaded everything I could find, including generous contributions from Stephan James and some helpful readers. If I unearth any more I will add those as well; likewise, if you have anything I've missed, please contact me (through the comments or at funderglass at yahoo dot com) if you would like to contribute some rips to the cause.
Posted by Fantod at 5:33 AM 3 comments: