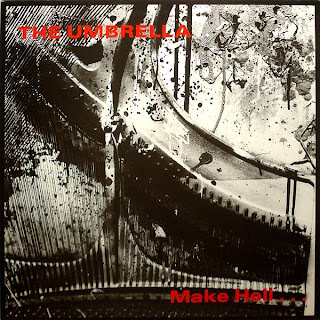 Manchester band The Umbrella released this 3-song 12" in 1985, and nothing more. They had a great sound, 60s pop overlaid with raucous postpunk guitar and organ; pretty close to what The Last Shadow Puppets are doing today. I've had this record for over twenty years without knowing anything about the band, but thankfully someone has filled in some history on discogs.com:

James Gardner: Founder member, in 1990, of the pioneering Apollo 440 together with his school friends Noko and Howard Gray, and Howard's brother Trevor Gray. He had previously played keyboards with The Umbrella and a variety of well known artists, including Pete Shelley's band and Luxuria. He left Apollo 440 in 1993 to concentrate on composition, and in 1994 moved to New Zealand where he formed the contemporary music ensemble 175 East. He is an active broadcaster on music for the eclectic Radio New Zealand Concert.

Norman Fisher-Jones: Multi-instrumentalist and sonic visionary Norman Fisher-Jones, aka Noko, had already gigged with The Cure, and The Buzzcock's Pete Shelley before he released his first 12" with his own band The Umbrella. He formed Luxuria with Magazine's Howard Devoto in 1987 and released two albums with Beggars Banquet. Together with original Umbrella member, James E. Gardner, their school friend Howard Gray, and Howard's brother Trevor, he formed Apollo 440 in 1990. An original member, he'd be at The Hacienda if it was still open.

As for the other two blokes in the band, I still don't know who they are; backing vocals (female) are credited to Alex & Julia. Make Hell... was released on Immaculate Records, which also put out some of Pete Shelley's solo singles. The three songs are "Make Hell (For the Beautiful People)", "William Brel", and the instrumental "The Persuaders". Get the vinyl rip here or here.
Posted by Fantod at 6:21 AM

Funny discogs lists this EP under "Genre: Electronic, Style: Synth-pop". This is very far from the truth as you described although there are some synths. I want to further mention the great singer who sings like it's his last chance: just plain enthusiasm, reminding me a bit of The Virgin Prunes' singer in his best moments. The instrumental is wonderful, too: a cover of the film music to the cult series The Persuaders with Tony Curtis and Roger Moore (in Germany: "Die Zwei"). Thank you very much for sharing!

Yes, the singer really gives it his all and performs some impressive vocal gymnastics, I meant to praise him in my post but I forgot to. A really great performance. And I never heard of The Persuaders before, I will have to find some episodes to watch. Thanks!