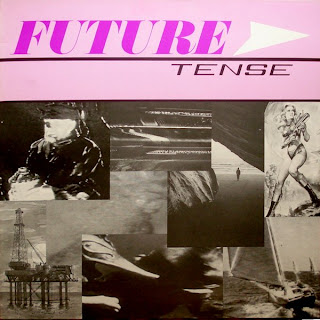 Like Four from the Madding Crowd, Future Tense is a four-artist compilation released by Gary Levermore's Third Mind label in 1986. Future Tense (TMLP15) was actually released first, with Four having the next catalog number (TMLP16). In fact, they released three compilation albums in a row, the third being the massive two-album set For Your Ears Only (TMLP 17/18, coming here someday) (and I definitely have it!). The Future Tense track list is: 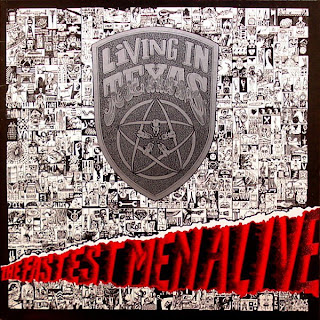 1985 was a busy year for Living In Texas: in addition to the Glad Bad Sad & Mad EP and the Italia Live Eighty-Five LP, they also released this studio album, all on their own Chainsaw label. On this release the band is still a four-piece: Stephan James (vocals), Mathew Fraser (drums, backing vocals), Daniel Glee (guitars), Nicholas D. Denton (bass). They brought in Martin Young of Colourbox as producer, and he also plays all the keyboards on the album (which are very subtle, you'll have to really listen for them to hear them at all). "The Fastest Man Alive" and its instrumental version continue in the amped-up rockabilly mode of Glad Bad (but even faster, as you may have guessed), while the major-chord "Like Thunder" sounds like a precursor of modern pop-punk. "Bomb Generation", heard on the live album, gets its studio release here; "The Fairest Of Them All" sounds almost like Gene Loves Jezebel; and the remaining songs are all in the band's gothic mode. The full track list is:
Cover art is once again supplied by guitarist Daniel Glee. I consider The Fastest Men Alive to be the last great Living In Texas record; get it here or here.
Posted by Fantod at 3:52 AM 9 comments: 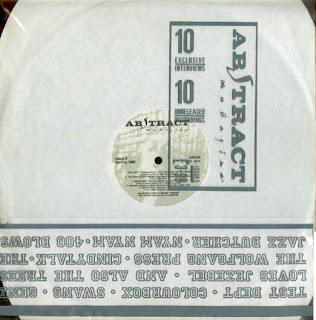 As promised, here is a new rip of the Abstract No. 5 LP from 1985 to replace the one that is no longer downloadable from Waves of Champaign. Rob Deacon started Abstract as a music magazine, then beginning with No. 4 a companion LP was released to accompany each issue, and from this project the great Sweatbox label was born. The cover touts "10 unreleased recordings," and at the time the album came out that was true, though most of the songs were eventually released by the respective bands. What is not true is that there are only 10 songs; there are actually 11, with the last track, "Sentient" by In the Nursery, omitted from all the packaging. The full track listing is:

A couple are quite experimental; the Test Dept. track is a political speech on the Welsh miners' strike followed by Test Dept. accompanying the bagpipe-heavy miners' band; the 400 Blows track is a sound collage not easily recognizable as "music" but with some structure and rhythm that is revealed through attentive listening. The Colourbox track features a great guitar solo by guest William Orbit; if only he had turned toward rock instead of Madonna, then I'm sure I would have listened to more of him in the 90s. The Jazz Butcher track is a John Cale cover, which if I recall correctly was banned from the radio for its mention of Manson Family murder victim Sharon Tate. Abstract No. 5 is another great selection of cutting-edge 80s rock; ripped from oddly mottled vinyl @192kbps, it is available here or here. 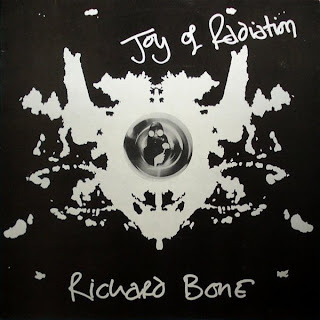 Another small file for you this time, I'm afraid. I was all set to rip the Abstract Magazine #5 LP, with Colourbox, The Jazz Butcher, Cindytalk, etc., when I did a quick blog search and found that, once again, someone has already posted it, this time on the Waves of Champaign blog. He's also scanned the magazine into a separate file, much more thorough than I would have been, so hurry on over there and download it if you don't have it already. Another record I've been meaning to post is Richard Bone's classic 1983 album of minimal synthpop Brave Tales, but I still can't find my copy. I did, however, find the 12" of "Joy of Radiation", with an extended version of "Joy" on the A-side and three tracks on the B-side: "Sordid Affair", "Do Angels dance", and "A bit of Joy", so I hope that will do for now. Get it here or here; click the Survival tag for other records from the great Survival label available on this blog.
Posted by Fantod at 6:34 PM 14 comments: 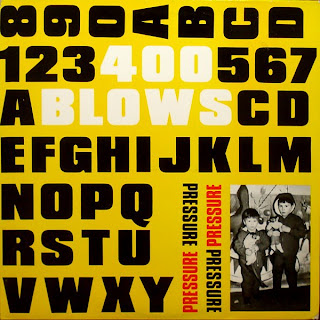 A recent visitor left some enthsiastic comments about 400 Blows, who are part of the Illuminated megamix album Heavy Duty Breaks, so I thought I'd offer up some more. 400 Blows may be best known today for "Black and White Mix Up" (a rather ridiculous remix with Mad Professor of "Groove Jumping") on Andrew Weatherall's exquisite Nine O'Clock Drop anthology of eclectic 80s dance music, but they left a pretty decent body of work beyond that. I have always thought of 400 Blows as the poor man's 23 Skidoo, following in their footsteps from dub to electro-soul and being almost but not quite as good. Which is still really good! 400 Blows' first album, If I Kissed Her I'd Have To Kill Her First, is already available on Rho-Xs (with great albums by A Certain Ratio, Rip Rig + Panic, This Heat, and more in the same post!), but I have a couple of 12-inch singles to supplement the album. The first is "Pressure" from 1984 (and the first LP), a mostly-instrumental song with a killer dub bassline presented in three versions plus the found track "Perspective 2". The second is from 1985, the electro-soul double-A-side of "Runaway" (a Rockwell cover, of all things!) with lead vocal by Cheryl Lucas, and the original "Breakdown" sung by Linda Duggan, in two versions each (remixed from the Look LP). That's eight tracks in all, packaged in a single zip file; get it here or here. 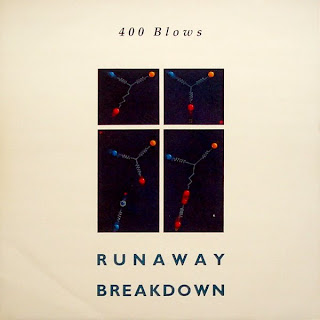 Back to Japan: Deep Cut, released in 1987, was the second album from ex-plastics Toshi Nakanishi and Chica Sato as Melon. (See here for their first album, Do You Like Japan?) On this album the band also includes Kudo (turntable, keyboard) and Gota (drums, computer programming, keyboard, guitar, backing vocals); guest musicians appearing on some tracks are Guy Pratt, bass; John L. Walters, Lyricon; Preston Heyman, percussion; Frank ricotti, percussion; and Colette, backing vocals. (See the discogs.com listing for specific track credits.) Deep Cut opens with a cover of Les Baxter's "Quiet Village" (made famous by Martin Denny), and the whole album has a loose "techno-exotica" theme, as evidenced by the song titles:

Also notable is the electro vibe that Gota brings to Melon's sound (which was state-of-the-art back then), with "Pleasure" and "Funkasia" being real dancefloor contenders. Get the vinyl rip here or here. 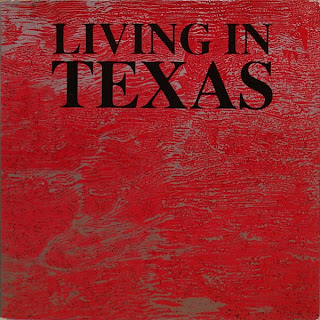 I found another Living In Texas album hiding on my shelves, their first full-length album from 1984, on their own Chainsaw label. I can't remember ever listening to it all the way through, but I did while ripping it, and I've fallen in love with "This Blood Religion." It's a full-fledged gothic ballad, beautifully arranged with three divergent vocal tracks during the verses. And the band's Theatre of Hate influence reveals itself also: Living In Texas had a different instrumental lineup (no saxophone) and singer Stephan James doesn't have Kirk Brandon's distinctive wail, but "Here Come the Boat Traders" would be right at home on a ToH tribute album. These two songs and one other, "Me (The Other Side of)", appear on the Living In Texas live album posted previously, but they all come across much better in these original studio versions. This album was packaged in a rather lavish gatefold sleeve; the cover art is a bit drab, but there's a great spread inside the gatefold, by "The Rorschach Design Studios," which I'm guessing is actually guitarist Daniel Glee. I've included the interior art in the .zip file; get it here or here. 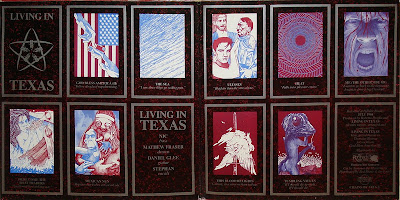