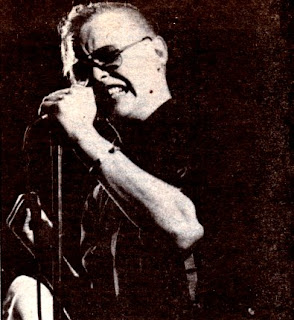 I have had little time for ripping lately, but I do have an exciting external contribution to present: three 12-inch singles by Sheffield wild man Peter Hope from the heady 80s. Many thanks to reader Alex for passing the rips along! They are:

Each record is in its own folder, all three folders in one .zip file: get it here or here. Links removed: Kitchenette to be reissued soon!

Living In Texas - Everything Was...

I am delighted to announce that I have some more Living In Texas rips to share, thanks to none other than the band's frontman Stephan James! First up is the compilation album Everything Was... from the French label Made In Heaven, which collects the earlier album Everything Is... and a few other tracks:

I'm not quite sure where these songs fit in the Living In Texas chronology, but the bulk of it sounds similar to The Fastest Men Alive (1985) in terms of musical style and production, so I'm guessing it comes between 1985 and the 1991 album Believe. The most notable difference between this record and (presumably) earlier material from Living In Texas is the prevalence of piano in the mix; there is even a full-fledged piano ballad, "Superman Is Dead." A larger trend that was happening in the late 80s was "dark" bands becoming poppier (think of The Cure's progression from "A Forest" and "The Hanging Garden" to "The Love Cats" and "Why Can't I Be You"), and that trend is reflected in this music as well on tracks such as "Sweet Little A-Bomb Baby," "Something Wonderful," and "Kill." But true to form, Living In Texas put a little more bite into it than the norm. Another standout in the sound is the chiming acoustic rhythm guitars in "Oh Yeah" and "Everything Is," the latter of which intercuts the band's trademark manic rockabilly with an expansive, arena-worthy chorus. And speaking of arenas, the album closer "Love That Child" is what U2 might have sounded like at the peak of their popularity (early 90s?) if they remembered to rock! In short, these eleven rare Living In Texas tracks rank with the band's finest and make an already-impressive body of work even moreso; get them here or here. 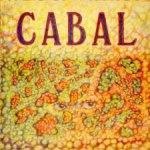 By some accounts Baltimore's first and greatest postpunk band, Null Set was the brainchild of singer Bill Dawson (previously seen here with Black Pete) and guitarist Mark Harp. Null Set's highest-profile gig was opening for the Ramones at Johns Hopkins University's Shriver Hall, and they were semi-regulars at the Marble Bar and DC's 9:30 Club in the early 80s. Their Bauhaus fandom shows pretty clearly in their early recordings; "An Evening In Town" is their "Bela Lugosi's Dead". Null Set came to an abrupt end when an identically-named band from another city put out a record; Baltimore's Null Set ended up changing their name to Cabal. In 1984 they released their only record, a self-titled 6-song EP on Buck Awf's ad-hoc Awf-Trak label; on it they started to come out from under the Bauhaus influence and expand their sound, even approaching synth-pop on "New Horizon." Commercial success did not ensue, however, and the band drifted apart. Mark Harp went on to record hundreds of hours of music in a myriad of different projects; he eventually divided them into 24 hour-long thematic sections and posted them on his website (and at the Internet Archive) as 24 Hours with Mark Harp. Mark died in December 2004, but his website is still there. What I am presenting here is the 12:00 AM hour of 24 Hours, containing all the Null Set and Cabal recordings; I have renamed the files and added ID3 tags for better playback display, and put them into a single zip file for easy downloading. The tracks are:

Get the zip file here or here. (New links) 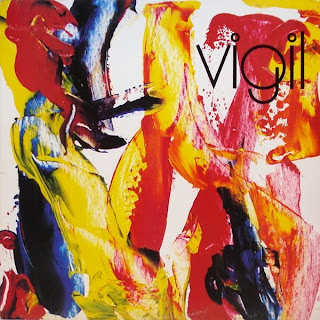 Continuing our brief musical tour of Baltimore in the 1980s, here is the sole major-label release of Vigil, previously known as Here Today. Here is the capsule history of the band from the Vigil MySpace page:

Vigil was a modern rock band that recorded and performed in the mid to late 1980's. Once upon a time in the "Land of Pleasant Living" aka Baltimore there was a group of musicians known as Here Today: Jo Connor, Andy R, X Factor and Gregg Maizel. They recorded a classic song called "Whistle in the Yard" and soon signed to CBS records, changed their name to Vigil and were promptly dropped. Vigil was quickly signed by Chrysalis Records and recorded their debut lp in glorious digital. It was released in 1987 and sold enough copies to allow them to record another lp but only one track, "Therapist", was released by Chrysalis, appearing on the Nightmare on Elm Street 4 soundtrack. Eventually the second album was released on cassette only as Onto Beggar and Bitter Things.

Vigil was influenced by UK bands, particularly those of the Gothic persuasion, and as a result their expansive, dreamy sound was quite different from most of the other Maryland bands of the era. "I Am Waiting" was released as a 12-inch single, but it was the wah-wah-guitar-fuelled B-side, "I Love You Equinox", that garnered all the airplay on WHFS:

I have never found a copy of the self-released, cassette-only second album, but I presume that the first three songs on Vigil's MySpace player come from it, since they are not on the first album. The full track list of the first album is:

The CD version of this album is a bit of a collector's item as it is one of the first (possibly the first) rock albums to be recorded, mixed, and mastered digitally ("DDD"). I don't have the CD, though, so I can only offer a vinyl rip for now; get it here or here. (I goofed a little on the track numbers in the tags and filenames, but everything still plays in the correct order.)

Update: I got the CD and have posted a FLAC rip here. 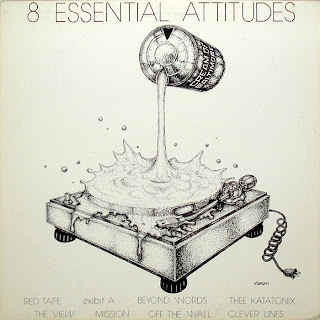 For this entry we remain in Baltimore but go back a few years to 1985 for the Frantic Records sampler album 8 Essential Attitudes. The album cover depicts a can of "Cream of Baltimore" being poured onto a turntable: do not do this! It will ruin your turntable! Fortunately the package contains a solid vinyl LP which is perfectly suited to playing on a turntable. The "8 Essential Attitudes" are eight indie bands from the Baltimore area:
The most accomplished band here is Off the Wall, but their big-band rockabilly style is decidedly out of place. Red Tape lean toward an AOR sound, Thee Katatonix are the closest thing to punk rock here, Mission have a gothic vibe belied by their preppy appearance, exibit A have an indie-twee sound, Clever Lines go for the grand sound of UK acts like Duran Duran and Simple Minds, and Beyond Words and The View play middle-of-the-road new wave pop. Not as diverse as the gathering on the Merkin Seedy Sampler, but it's a smaller, earlier sample. Get the vinyl rip here or here. (I'm trying out flyupload with the second link; from what I've seen it has no waiting period and does allow download managers. Please let me know if there are any problems with it.)
Posted by Fantod at 9:24 AM 6 comments: