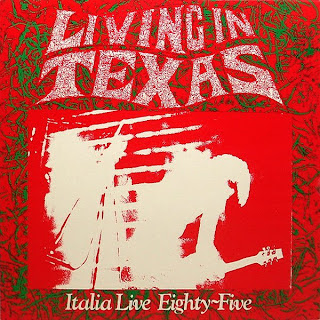 Continuing the Living In Texas posts, here is their live album, Italia Live Eighty-Five. It contains live renditions of two songs from their first EP ("My End of Heaven," "Julia's Child"), three from their first album ("Here Come the Boat Traders," "The Other Side of Me," "This Blood Religion") a ten-minute version of "Kingdom" (a 12" release), "The Bomb Generation" from the Fastest Men Alive album, and the exclusive "Four Minutes." That's eight songs altogether, plus a spoken introduction in Italian that I have split out into a separate track. One wonders why they chose this particular recording (Genoa, 26 February 1985) to release as a live album: it was recorded in mono on a four-track TEAC. The sound quality is not that great. However, the band does display its range and its rather unusual stylistic potpourri of gothic rock, rockabilly, and proto-grunge. "Kingdom" really is an epic tour-de-force; I don't have the studio version, but I've just put it on my active wishlist. Get the vinyl rip here or here.

For some reasons Living In Texas had a cult following here in Italy. I found their 1st LP in a shop that usually had no indie/import records. I also remember I missed this concert that was held at only about 50 km. from my home.
Thanks a lot for this post.

Hi, can you post me some mp3 files? Ive been looking for this on cd for ages. I have some on vinyl and loved the band live.