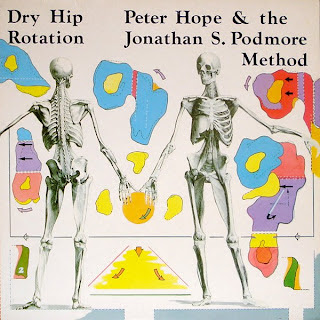 Here is another of Peter Hope's one-off collaborations after the breakup of The Box in 1985. 1986's Dry Hip Rotation, recorded with Jonathan "Jono" Podmore (who would later become known as Kumo) has Hope's trademark growl/howl and off-the-wall lyrics over decidedly unconventional backing tracks (even for Hope). Podmore supplies most of the instrumentation, which includes: half-pound baking tin, cutlery, Parkinson Cowan oven, Robot Chef, plates, Hoover Junior, Creda Tumble Drier 400, C. Z. Gate, stone, tapes, EMS Synthi AKS, stairs, harmonica, ceramics, four pound sledgehammer, prepared piano, violin, rhythm box, two foot scaffolding section, EMS VCS 3, drills, screams, and masonry chisel. Cabaret Voltaire fellow-traveler Alan Fish provides percussion on a few tracks, and there are also guest spots by Sheffield noise mavens John Janosch and Charlie Collins. All this came six years before Tom Waits would impress everyone and reignite his career with a similar approach on Bone Machine. Coincidence? Get Dry Hip Rotation here or here. (Links removed: album reissued!) Hope and Podmore recorded one more song together, "Toilet", which appears only on the 12" single of "Kitchenette." I don't have that one; if anyone can supply a rip of "Toilet" I'll add it to the DRH archive; please leave a note in the comments.
Posted by Fantod at 5:06 PM

Ooh, could I persuade you to upload them? Or email them to me at funderglass at yahoo dot com?