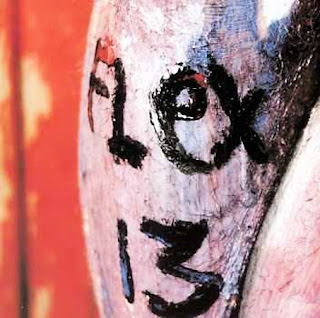 Peter Hope and Charlie Collins of Sheffield no-wave band The Box (and Clock DVA, in Collins' case), who broke up in 1985, resurfaced in 1998 as Flex 13. They released a CD on Liquid Records called Paint My Legs, which is described on the back cover as "A recording of sonically degraded cinemorphic sidewinder blues... (Flex) 13 uneasy listenings for the escalator down." (Because there are 13 tracks.) Hope is credited with "voice/instruments/theft," Collins with "instruments/boxes/wires." It's a much lower-key affair than The Box; the joyous, frenetic cacophony is gone, replaced by slow to mid-tempo blues and dub beats, often sampled and looped (I assume that's the "theft"). Hope's vocals rarely rise above a murmured growl, with none of the yelping and bursting energy of his 80s work. It's not bad; it seems to have come out of the whole chill-out craze of the 90s, but it has more character than most music in that genre, as you can see from the song titles:
The variety of instrumental sounds is also interesting; in that respect it bears some similarity to Dry Hip Rotation. No Peter Hope collection can be complete without it. Get it here or here.

(This is the most recent recording of Peter Hope I've been able to find. If you know of any newer material, please let me know in the comments.)

There is another Flex 13 album called Candy from 1999.

Why, sure enough. Thanks for the tip!