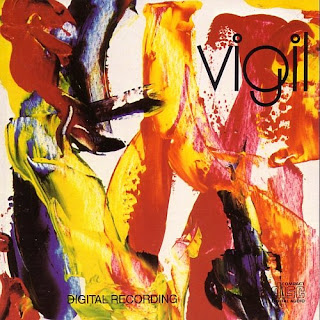 This entry is a repeat of one of last month's posts, but with a key difference. The original post linked to a standard 192kbps mp3 rip from vinyl. An alert reader turned up a copy of the CD release, however, and a quick order made it mine. So I am breaking with my normal policy to present a FLAC rip of this special CD, one of the first rock CDs to be digitally recorded, mixed, and mastered. The archive is spread over three files (join with HJSplit or 7Zip):
RS: File 1
MU: File 1, File 2, File 3
BD: File 1
DF: File 1
HF: File 1
This rip eliminates the distorted sibilants in my vinyl rip, and of course the surface noise; it is pristine. (CD ripped to FLAC with Exact Audio Copy.)
For those who missed the band info the first time around, here it is again:
Continuing our brief musical tour of Baltimore in the 1980s, here is the sole major-label release of Vigil, previously known as Here Today. Here is the capsule history of the band from the Vigil MySpace page:

Vigil was a modern rock band that recorded and performed in the mid to late 1980's. Once upon a time in the "Land of Pleasant Living" aka Baltimore there was a group of musicians known as Here Today: Jo Connor, Andy R, X Factor and Gregg Maizel. They recorded a classic song called "Whistle in the Yard" and soon signed to CBS records, changed their name to Vigil and were promptly dropped. Vigil was quickly signed by Chrysalis Records and recorded their debut lp in glorious digital. It was released in 1987 and sold enough copies to allow them to record another lp but only one track, "Therapist", was released by Chrysalis, appearing on the Nightmare on Elm Street 4 soundtrack. Eventually the second album was released on cassette only as Onto Beggar and Bitter Things.

Vigil was influenced by UK bands, particularly those of the Gothic persuasion, and as a result their expansive, dreamy sound was quite different from most of the other Maryland bands of the era. "I Am Waiting" was released as a 12-inch single, but it was the wah-wah-guitar-fuelled B-side, "I Love You Equinox", that garnered all the airplay on WHFS:

I have never found a copy of the self-released, cassette-only second album, but I presume that the first three songs on Vigil's MySpace player come from it, since they are not on the first album. The full track list of the first album is:

I've been looking for this CD for a long time. This was one of my favorite albums in the late 80's.

You just made my week.

can you re-upload please? it's expired from RS and MU says that part 1 is "temporarily unavailable" (it's been this way for a while). THANKS!!!!!!

I've added some mirrors that should provide downloads of all three parts; they were all active at time of posting.

thank you SO MUCH for re-upping! greatly, greatly appreciated! I loved this (on vinyl) when it first came out!

OK, File 1 is now reupped to MegaUpload and four other hosts.

White Magic Spell kept randomly popping into my head the past few days. I think I still have this cassette I bought in 1987 under my bed along with my unreliable (broken?) cassette player. I love this album. Thanks for posting! Now I have to go add them on MySpace.

I saw Here Today (pre-Vigil) open for OMD (yep, the synth pop band) at the old Warner Theater in Washington DC; I used to own the "The It / On Me" 7" single and got a good digital copy of it before (regrettably) selling in the early 2000s; I STILL have my Vigil photo/press kit the band sent me (with the 12" single) shortly after the Chrysalis release; I think fans would definitely dig the 2 songs from the 7" (I should have original artwork too); How can I get you the files for you to upload?

Wow, I'd love to see and hear those, Afterlife!

Can you p-l-e-a-se re-upload the music to a viable site (rapidshare, depositfiles, etc)?
Thank you!!!!

None of the Vigil or Here Today links work anymore. Do you still have the files?