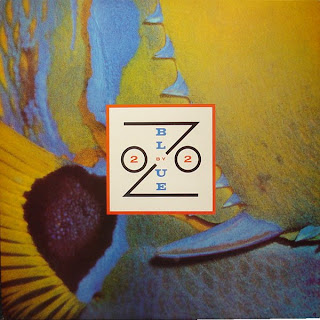 Four-man UK band Blue Zoo released just one album, Two By Two (1983), produced by Talk Talk's Tim Friese-Greene. It led off with their sole hit single, 1982's "Cry Boy Cry," which peaked at number 13 on the UK chart. It's a great single, too, with a driving rhythm perfectly suited to, say, sports highlights clips, and features the powerful backing vocals of Stevie Lange in the chorus. (Stevie Lange also provided the chorus vocals to Gang Of Four's "I Love A Man In Uniform," and was the lead singer of Night, who were one of the bands featured in the campy Vincent Price horror film The Monster Club.) The other four uptempo tracks (which I will denote with an asterisk in the track listing) on Two By Two are nearly as engaging, impelled forward by a sequenced instrument that sounds like something between a hammer dulcimer and a glockenspiel; perhaps that is the Celeste 8 credited to Matt Flowers? The rest of the album consists of slower ballads, which are generally pleasant and have a few hooks but mostly have trouble coming to life. The full track list is:

Thank very much for this. Greatly appreciated.

This album was HUGE in the Philippines! "Love moves in strange ways" was a big hit there among the new wave crowd in that country.

You're welcome, I'm glad you liked it. "Love moves" is the best of the ballads on the album. I've posted the UK pressing; the US version had a longer version of "Cry Boy Cry", if I find that longer one I'll put that up too.

Thanks for posting some of the more interesting bands from the 1980s.

great post, im looking for the amazing band i can crawl...

i got this album on vinyl formal too, and the extended version of love moves in strange ways and cry boy cry. but i dont have the proper tools for ripping vinyls to mp3.
:(

I was going to post this album but you beat me to it,great choice.So I have posted some songs not on the original album including the longer version.
Hope you dont mind I have linked the album post to you,cheers Mikeyten

John's Lost was the only song I liked. Don't see the big deal with Cry Boy Cry, then again I don't follow mainstream music very often.

1) Mikey's post is pointless, since you can only view that blog if you're invited. And no, I won't beg for invites, as I don't waste my time with such silly things.

2) This is (apparently) NOT their only album. There was another one year later, though extremely rare, on Jugoton/Yugoslavia.
Don't ask me why it was YU of all countries with the only release known to mankind, but maybe it was due to some label issues.

sorry, I should have named the title
"FOR ALL I CARE"

Good day! I was wondering if you could email me: pvmpkin@gmail.com, a downloadable link of Blue Zoo's 2 By 2 album (Vinyl or CD). I'd appreciate it alot!