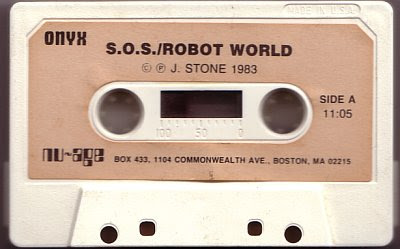 One of the great lost bands of the new wave era is Boston-area Onyx, unmentioned in any online music guide, unrepresented in the online music marketplace but for a single 7" 45 of "Call of the Wild" b/w "S.O.S." on GEMM (as of this writing). Between 1981 and 1983 they released just two singles and a four-song cassette that included two songs from the single releases, all on their own Nu-Age label. They sound like a three-piece: acoustic drums (sometimes phase-shifted), a heavy electric bass that serves as the lead instrument, and keyboards that create a spacey atmosphere; the overall effect is of a more beat-heavy Krautrock. The female vocalist does not sing, but whispers or recites a narrative over the driving instrumental backing. "S.O.S." is particularly infectious:

Presented here is a rip of the cassette, the full track listing being:

Total playing time is about 23 minutes. I don't have the actual cassette handy, so the picture above is just a reconstruction; there was no cover art. Update 9/3/08: I found the tape! The actual cassette is now pictured above.

This is a revelation, never heard of them before. Thanks !

Glad you like it! This is the band I would most like to rescue from the dustbin of history.

Hard Corps (NOT the shite hip hop outfit) need that too.

Hard Corps -- "Respirer", was it? I don't have any apart from compilation tracks, unfortunately, but I'll keep an eye out for their records.

I heard Onyx's "Call of the Wild" on a college radio station way back in the early 80's and just loved the song. I could never find a copy to buy. Had no idea where they were from. And I lived in Boston from 1984-1987... sigh. I'd love to hear the song again.

im impppppressed. thank you very much!

Love this band's sound, and "Robot World" gets better and better, great long ending, and the girl singer is so sexy! A great new wave find, thanks a million! Hey, Boston's Busted Statues have a studio version of a song called "Allure", from 1986ish, if you could find that that'd be terrific, I've had no luck finding it! Sincerely, Cresh

British label Light Sounds Dark has done a nice job with a dance re-mix of "Robot World", and appears on their recent release "Danger Electrified Tracks" along with the original mix. Also on the compilation is Onyx's "Call of the Wild".

with the release of the danger electrified tracks comp, would love to see this cassette & the 2 45's re-upped.
thanks Torch

could you please reupload this?
All links are long dead...
(maybe on someplace more reliable than hotfile\rapidshare and the now "fed-up" megaupload)

It looks like there has been a follow up of sorts recently released: Judd Stone and Jayde Lee "Onyx 2", MP3 on the normal sites.